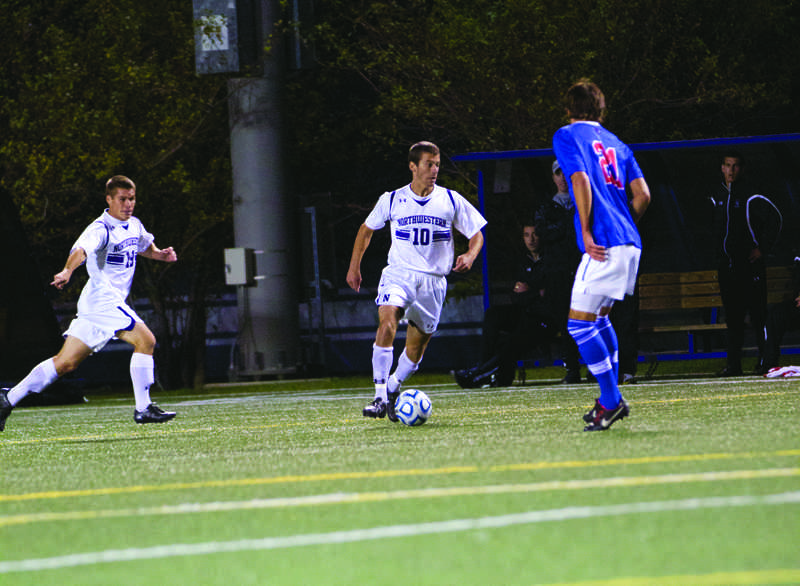 FAMILIAR SCRIPT Joey Calistri and NU hope the team can recreate what happened last season. The Cats bounced back from a 4-0 DePaul loss to win the Big Ten.

A loss to DePaul may be the best thing to happen to No. 18 Northwestern this season.

After starting the season with an eight-game winning streak, the Wildcats fell to the Blue Demons on Wednesday night. Last season, when NU fell to DePaul, also in the ninth game of the season, the Cats would not lose again until the NCAA tournament.

“I told (the players) the same thing I told them last year after they lost 4-0,” coach Tim Lenahan said. “How your season goes will be determined by the next nine games, not necessarily the first nine games.”

Now, the team shifts its focus back to conference play with a matchup with Michigan State (3-5-1) looming on Sunday. The Cats are 1-0 in conference play so far, dropping Michigan 2-0 last week.

For NU to continue its success within the conference after winning the Big Ten last season, it must regain the form it had prior to the DePaul game.

“We have to refocus and everybody’s got to play for the ‘N’ on the front of the shirt,” Lenahan said. “That’s been formula, that’s been our success.”

Freshman forward Joey Calistri and sophomore midfielder Grant Wilson must also regain their form to aid the Cats’ offense. For only the second time all season, NU failed to score a goal in Wednesday night’s game. Calistri, the team’s leading goal scorer, and Wilson, the conference’s top man in assists, could not get going against DePaul.

Sophomore goalkeeper Tyler Miller lost his shutout streak after the loss, giving up a goal for the first time since a contest against Rhode Island on Sept. 9.

“Coming off a loss, we’re going to do whatever we can to be more focused as a team,” Miller said. “You don’t win a trophy for being 6-0-2 in the middle of the season. It’s all about what you do at the end of the season.”

The Spartans enter the game under .500, struggling at home so far  with a 1-3-1 record. The game against NU will wrap up a three-game home stand for Michigan State, who split the first two, losing to Marquette in overtime but toppling Western Michigan.

The Cats should still be able to count on their defense when they travel to East Lansing. Aside from one blatant miscue that led to DePaul’s second goal, the defense played well against the Blue Demons.

Last season, NU and Michigan State clawed and scratched to a 1-1 tie in Evanston. The Cats dominated the game on the offensive end, with a 14-3 advantage in shots, as well as a 10-1 advantage in corner kicks.

But the Cats could not pull away from a team that was then 1-5-1, indicating that the matchup between the two squads could be much closer than each team’s record indicates.

Ultimately, NU believes it can return to its winning ways if it harnesses the energy and focus it played with for the first month of the season.

“I really want to see us bounce back,” Miller said. “I think we can bring energy and hopefully we can get going again.”