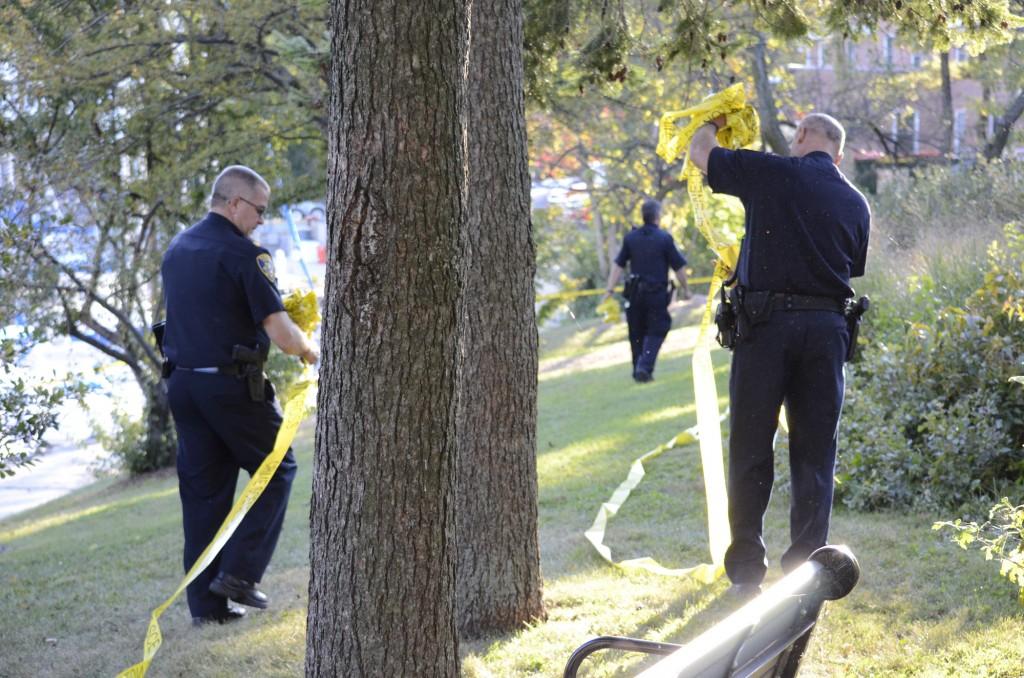 Police officers remove the crime scene tape surrounding the harbor Wednesday evening. As of Wednesday night, Maddula has not been found.

Investigators launched a massive search effort in the morning at Wilmette Harbor after learning that the last signal sent by the McCormick sophomore’s phone was received at a nearby cell tower. Divers and sonar teams searched Lake Michigan while other law enforcement personnel conducted an “extensive” search of the grounds in nearby Gillson Park.

“Divers (are) in the water to search for our student’s body,” NU spokesman Al Cubbage said at a news conference near the lake. “Hopefully it’s not a body, but at this time it’s unknown.”

Cubbage called the new information about Maddula’s phone activity the biggest break in the case so far.

The signal was only a “ping” and not an actual call, Cubbage said.

The signal was received around 1 a.m. Saturday, roughly half an hour after friends say they last saw Harsha leaving a house party on Ridge Avenue. The house is almost two miles away from the harbor, and it would take someone about 35 minutes to walk there.

Parents Prasad and Dhanalakshmi Maddula offered a $25,000 reward for information leading to their son’s safe return.

More than two dozen family members and friends have flocked to Evanston to help find the McCormick sophomore. Fading optimism among the family was clear during a tearful midday news conference in front of UP headquarters.

“It’s horrible,” Prasad told The Daily later Wednesday. “I was so upset that they were checking in the lake. My hopes are gone.”

The U.S. Coast Guard started searching the harbor around 9 a.m. Wednesday. After the initial effort around the inlet uncovered no sign of Harsha, investigators turned to other areas around Wilmette Harbor and Lake Michigan, according to a University news release.

A total of 21 law enforcement agencies assisted the Coast Guard with the search, including the Wilmette Fire Department, Chicago Police Department and other regional units from Lake and McHenry counties.

More volunteers showed up at Seabury Hall throughout Wednesday to help search on foot and post flyers featuring Harsha’s photo and search-relevant information across campus and Evanston. About 150 to 200 students participated in the searches, according to Seabury staff.

About 60 to 80 students went out in search parties on Tuesday. More students turned out as news of Harsha’s disappearance continues to spread around campus and on social media.

Groups canvassed almost all of Evanston — all the way south to Howard Street — and split the city into 10 different sections for searchers. However, volunteers have yet to find any signs of Harsha or his personal belongings, Cubbage said.

In an email to members of the NU community, Vice president for student engagement Burgwell Howard announced that search parties would continue on Thursday. He also made an appeal to students who know about Harsha’s disappearance to speak up.

“We have heard that there may be some concern that people may not be sharing information because they are afraid the police or the university may take action against them,” Howard said in the email. “Nothing could be further from the truth.”

Howard said in the email that students could use emergency “blue light” phones and the online EthicsPoint reporting platform to anonymously and safely provide tips to police.