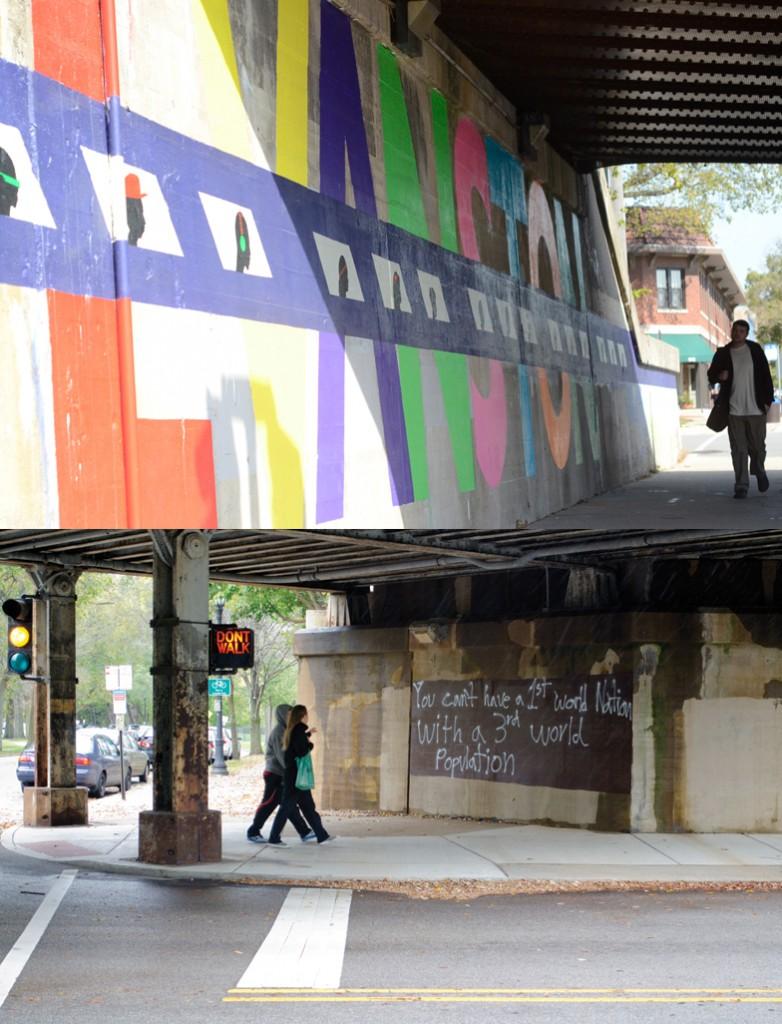 The viaduct at the intersection of Green Bay Road and Central Street after being painted by students (top). A graffitied viaduct pictured in the Fall of 2011 (below).

A year after someone sprayed anti-immigration graffiti on viaducts across the area, Evanston Township High School students have replaced the xenophobic message at the corner of Green Bay Road and Central Street with a colorful mural featuring the word “Evanston” in large block letters. An illustrated train runs through the center, carrying silhouettes of the student artists who worked on it.

The artwork is the brainchild of ETHS seniors Jessica Baum and Olivia Chandrasekhar, who started the project over the summer in hopes of creating a visual display of Evanston’s ethnic tolerance and cultural vitality.

Baum’s interest in the anti-immigration controversy began last summer, when local police discovered graffiti at various locations on the north side of Evanston, including one tag reading, “You can’t be a first world nation with a third world population.” Baum, a rising junior at the time, was walking in her neighborhood when she noticed the words marring the viaduct.

“I thought it was horrifying and it completely shocked me,” she said. “It was a bit naive of me, but I didn’t think people in Evanston thought that way.”

Due to the “surprising and unusual” appearance of such rhetoric in Evanston, Baum said, the graffiti stuck with her. That winter, she brought up the subject with Chandrasekhar, her close friend and classmate. An artist particularly interested in street art, Chandrasekhar said she believes there is a shortage of murals in Evanston. She and Baum were inspired to contact local officials and share their idea for a mural that would both make a political statement and add to Evanston’s artistic profile.

“Evanston does have its own cultural presence, but that’s overshadowed by our neighbors in Chicago,” Chandrasekhar said.

With this mindset, Baum and Chandrasekhar approached local youth advocacy agency Youth Organizations Umbrella for help with their project. The pair also worked with Alissa Sobel, ETHS after-school coordinator, to recruit other students to help paint.

After seeking approval for their mural from numerous city officials, local businesses and viaduct owner Union Pacific, Baum and Chandrasekhar hired an artist to transfer the design from paper to wall and to assist with the painting process. One Y.O.U. employee with graphic design skills designed the mural based on the images and symbols the students wanted to incorporate.

“It was interesting to watch the kids’ creativity flow,” Sobel said. “They were really into it.”

About 15 to 20 ETHS students from the Y.O.U. summer program helped paint the mural. Prepping and painting the wall took about two weeks.

Baum and Chandrasekhar have since developed the Paint Evanston Beautiful program. Their mission is to bring Evanston community members together through the painting of positive messages on public property. The girls say they hope to have something else painted in the summer of 2013.

“We want to approach someone new and do something that is more complex,” Chandrasekhar said.

Because she and Baum plan to leave for college next fall, Chandrasekhar added she hopes the program will continue and inspire people to create their own installations and murals.

“We want the community to see that they should be proud of our culture,” Baum said. “We are working together to create something that we can be proud of and that’s beneficial for our community.”