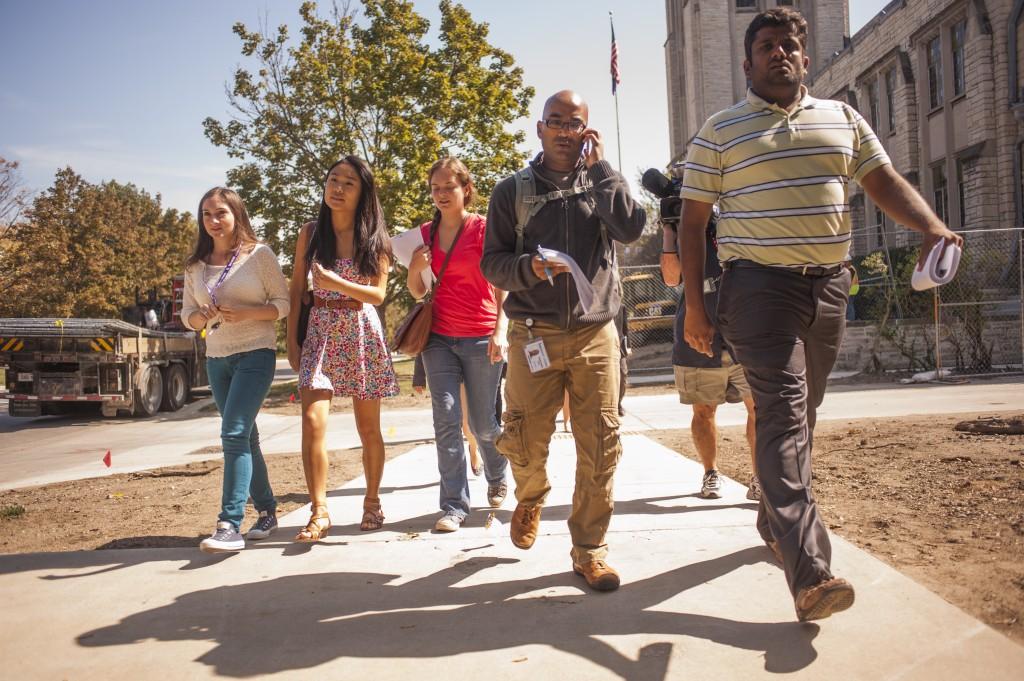 Communication freshman Katherine Koller, Weinberg freshmen Margaret Kuo and Sarah Holmstrom (left to right) show Ihanthan Toodi and Sairavi Suribhotla the way to University Place where they planned to recruit passersby to find the missing student. Toodi and Suribhotla, who are not friends or family of Harsha Maddula, responded to a Facebook alert calling for volunteers to mobilize a search party on campus.

Family and friends of the McCormick sophomore, many flying in from the East Coast, congregated throughout the day in front of University Police headquarters.

Maddula, 18, was last seen early Saturday morning leaving a party in the 2000 block of Ridge Avenue. His friends first told UP of his disappearance later that day and the University sent out a campus-wide alert Monday night.

University spokesman Al Cubbage told reporters Tuesday morning that the administration has taken steps to expand the investigation into Maddula’s disappearance. Previously, the missing person case was handled internally by UP.

UP officials met with members of the FBI on Tuesday, and the Evanston Police Department has assigned detectives to the case as well, Cubbage said. State and county law enforcement agencies have also been notified of the situation.

The U.S. Coast Guard, which was involved in the most recent high-profile search for a missing NU student, is not currently participating in this investigation, according to a Coast Guard official who oversees operations around Lake Michigan.

During the investigation, UP repeatedly searched Maddula’s one-person room in Public Affairs Residential College, reviewed security camera footage from the dorm and checked his electronic key and cell phone. Police concluded he has not been in the dorm since he left Friday night and that the searches turned up no new leads about his current whereabouts, Cubbage said.

The student’s parents, Prasad and Dhanalakshmi Maddula, arrived in Evanston late Monday night.  They met Tuesday with University President Morton Schapiro, as well as officials from UP and the Division of Student Affairs.

“Everybody is upset and sad that we cannot find him after almost three days now,” Prasad said. “This is the fourth day and we want them to get him — that’s the bottom line.”

Holding back tears, Dhanalakshmi said her son is a quiet boy with only a small group of friends.

“He likes to study and he worked so hard to come here,” she said.

Surekha Maddula, Harsha’s aunt, left her medical residency at Lenox Hill Hospital in New York on Tuesday to be with the family in Evanston and help organize search parties at NU.

In all, about four groups of 20 people each searched both on and off campus, posting flyers and looking for traces of the missing student, Surekha said. Students, alumni and Evanston residents, as well as Harsha’s family and friends, were all part of the effort.

“Anyone who could just dropped whatever they were doing and helped out,” said SASA co-president Nikhil Bhagwat, a Weinberg junior.

In addition to promoting the search effort, Surekha has acted as a family spokesman for the reporters that descended on campus Tuesday. News of Harsha’s disappearance spread quickly beyond Evanston to Chicago’s main newspapers, television networks and radio stations. New York media picked up on the story, as did some national news outlets, including Fox News and the Huffington Post.

“If the media is going to be the people on our side then so be it — I would like to believe Northwestern is on our side,” Surekha said, questioning the timing of the campus-wide emergency alert sent to students. About 50 hours elapsed from when UP first heard of a missing student until the NU community was informed via email Monday night.

Patricia Telles-Irvin, vice president for student affairs, sent an email to the NU community Tuesday with a plea for student volunteers to join the search effort. More searches will leave from Seabury Hall between 9 a.m. and noon Wednesday, and the University will provide flyers, maps of Evanston and tape, she announced in the email.

“This is my son,” Harsha’s father said to the crowd. “It’s been four days. I don’t know what happened to Harsha. My hopes are fading.”

Lewis said UP has sent bulletins to the Chicago Police Department, Chicago Transit Authority, other nearby universities and law enforcement agencies across the country.

A clearer picture of the details surrounding Harsha’s disappearance emerged after The Daily interviewed friends who were with him on the night he went missing. These students did not want to be identified due to the sensitivity of the situation.

Harsha left PARC around 10:30 p.m. Friday with about eight friends. The group first went to an off-campus party near Garnett Place but eventually made their way to a house party in the 2000 block of Ridge Avenue.

That student, who said he was sober because he was monitoring the door, said Harsha was coherent, wasn’t stumbling and did not appear drunk. Other friends said Harsha is not a heavy drinker, especially because he is a diabetic. Harsha’s aunt Surekha said her nephew no longer needs to inject insulin but takes medication daily.

The group eventually arrived at another off-campus party before realizing they lost Harsha on the way. It is not clear how Harsha separated from the group while traveling between the two locations, which are less than eight minutes apart by foot.

Harsha called Weinberg sophomore John Kim at 12:10 a.m. Saturday and asked where Kim was. Kim replied he was still at the party on Ridge Avenue and Harsha said he was “going to see if he could make it over there,” Kim said.

Friends say PARC president Linzy Wagner, a Weinberg sophomore, called Harsha at about 12:35 a.m. and asked where he was. Harsha told her that he was back in his room at PARC, which was not true according to UP. This was the last known contact from Harsha. The friends contacted UP around 6:45 p.m. later that day.