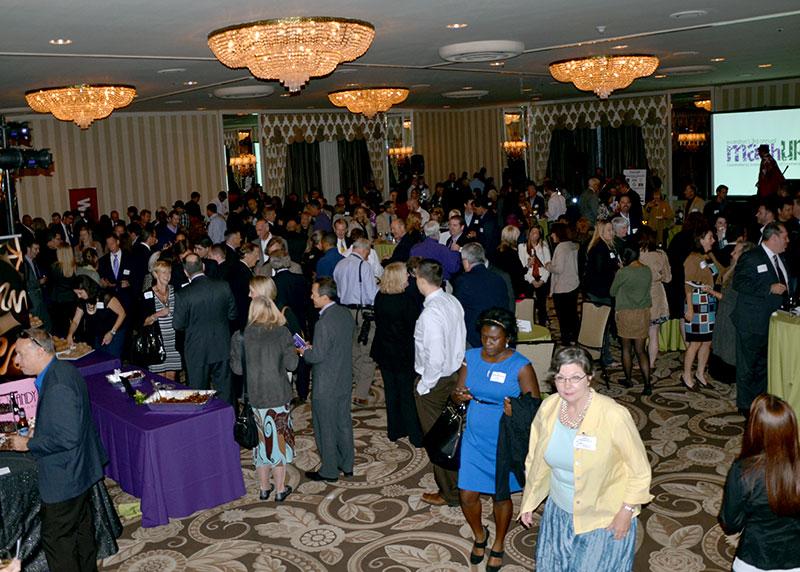 About 200 people turned out to the third annual MashUp networking event, which was held at Hotel Orrington after its original venue of a Northwestern beachfront tent blew over.

Joey Conway, events coordinator of sushi restaurant Koi, described MashUp as the one Chamber of Commerce event “everyone looks forward to every year.”

For many participating small businesses, MashUp was an opportunity to meet other business owners and market products. Michael Vasilko of Vasilko Architects and Associates used the event to spread the word about a development project: the transformation of 727-729 Howard St. into a theater for the coming of Edgewater company City Lit Theater.

“It’s all looking very positive,” he said of the project he and Ald. Ann Rainey (8th) have been working on for more than a year. “Everyone who lives or works along Howard Street is excited about the idea, so it’s not that I have to do a lot of work but I just want to make sure the other chamber members and other businesses know about it.”

Other items on the agenda at Wednesday’s event included the presentation of three awards: The Corrine Passage Spirit of Evanston Award, BurgerWar Winners and the Catalyst Award, which recognizes efforts to improve relations between the city and Northwestern.

This year, the Catalyst Award was granted to Kemi Jona, director of the Office of STEM Education Partnerships, and Supterintendent Eric Witherspoon of the Evanston Township High School.

“The city is proud to be part of the MashUp, and as for the Catalyst Award, Northwestern University has always worked well with the Evanston school systems,” Tisdahl said. “But recently Northwestern has decided to make sure that Evanston Township High School is the number one high school in the United States.”